Behind the Scenes documentary

Film of the Performance 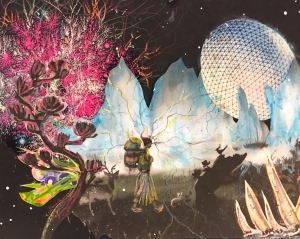 Our story begins with the unraveling of the world. Evacuations from escalating natural catastrophe’s precipitate the diaspora of the word. We all become refugees. This opening scene touches the sadness and grief of climate change. The anguish of humanity becomes a collective prayer that invokes the grace of Divine perception. As the ordinary reality dissolves, the mythic realm scintillates into view.

The heroine embarks on a mythic journey that reconnects her with wisdom of creation. In the silent aftermath of the deluge, she hears the “songs of the stars” opening her perception to the vastness of time and space. In an enchanted forest, heightened vision enables her to see the Prana (Life Force energy) beneath the many forms of nature; One Life flowing in all creatures.

Awakening to the reality of subtle realms, she is guided by the intrinsic Divine intelligence within and around her. As she reaches the apex of the Misty Mountains, shining Devas impart seeded symbols of higher consciousness. At his thresholds, she gains the courage to choose love over fear, hope over despair.

Though the heroine thought she was alone she now sees that there are many others who also believed they were alone. Each, on their own journey, has opened the channel that restores their roots in the terrestrial and their antennae to the celestial. They have become conduits of heaven and earth.