The Development of Ancient Future

The seeds of a new civilization are the new stories that are emerging in the Zeitgeist of our times. If they come simply from our rational mind, they will reiterate what we already know. We must draw from modes of consciousness outside the conscious mind- territories that reach both the taproot of primordial archetypes and the shimmering realms of epiphany. This is the work of creative process.
In this short clip you’ll see a glimpse of our intentions going in to the production of Ancient Future.
Through the generosity of visionary supporters we brought the performance to Findhorn, Scotland for the conference Climate Change and Consciousness. 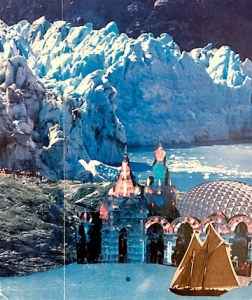 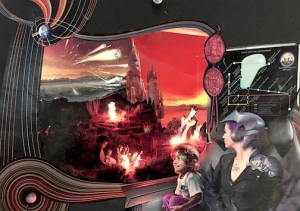 The content of Ancient Future emerged through an intense sustained creative investigation over the course of three years. Yet if I look back in journals, I can find dreams and intimations of this story going back over 10 years, such as these collages from 2001.

Five years ago I painted the image that began to flow forth the story of Ancient Future.

In 2017 and 2018 I took my own ‘artist in residency’ at the studio I had created for teaching classes. For several months each year my studio was filled paintings, scene dioramas and models of sets and props. 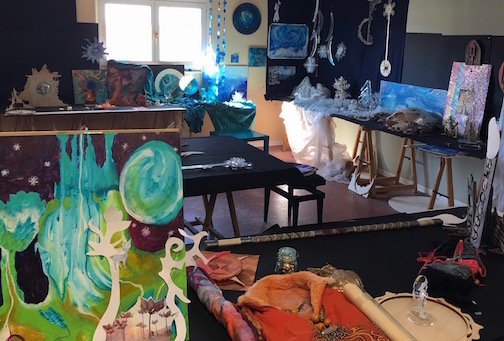 In the final months we made installation stations for each of the scenes…to help us to visualize the story and to explore how we would render the sets, props, projections and costumes. 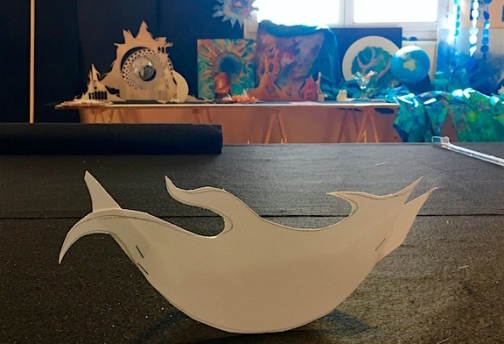 This archetypal shape was a boat, the waves of the sea and sometimes a whale… It eventually made its way into the 3-D boat made of poles and spandex.

The content of the storyline emerged through the creation of image and objects.

Along the way I experimented with many concepts of how we might create the story in theatrical form- most of which did not become part of our final piece. Some of these ideas were simplified and refined, some are waiting to be developed in future renditions. 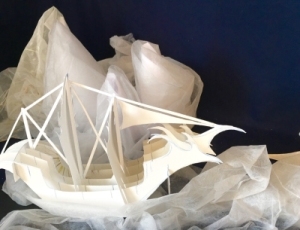 Throughout the investigation there was a commitment to the depth and integrity of creative process- to following the inner threads even when they don’t make sense to the rational mind. “What does a crystalline wand have to do with a diaspora?” Rather than indulge in questioning what was emerging, I worked as an ‘archeologist of the soul’ gathering precious ‘artifacts’ from inner realms. As the anthropologist slowly assembles shards into a pot, so does the soul eventually discover the patterns of coherency that allow the whole to be made visible.
In this example, the ‘Diaspora’ referred to the mass displacements that are already a part of our changing climate, and are predicted to reach 143 million by 2050. This became the opening of the piece, the exile of humanity. The ‘Crystalline Realms’, I began to see, represented higher levels of consciousness; disclosing clarity, purity, and a highly elaborated complexity within a unified whole.  Water, the primordial fluid of life, crystallizes into the highly unique patterns of individual snowflakes. Intricate designs emerging from the simplicity of a single substance intimate the underlying unity within diversity. This became the final message of the piece, as individuals on their journeys gathered to form a new constellation.

By taking the time to explore in a deep way, the content tapped into the deeper wellspring of wisdom carried by the soul in its long journey through time and space.
Ancient Future was performed at the conference on Climate Change and Consciousness at the Findhorn Community in Scotland, but its journey has just begun.

Join us for the journey~!